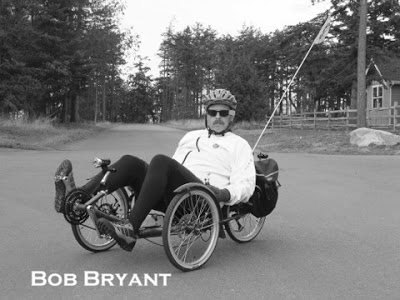 as published in ERRC Magazine

I have been given an opportunity to answer this eternal question. Here is my feeble attempt at some highlights.

The comments I get about Recumbent Cyclist News is that people like to read it cover to cover. Unlike going to the post office, seeing Rodale’s Bicycling, and sending it trash ward. It has matured into a journal of a great eclectic mix, from home builts, new product, touring pieces, and opinion that is thought provoking. In a world of mind numbing white noise, RCN stands out as a rare piece of character.

“He has made us less closed minded.”
Ron Schmid

(In response to the notion that some consider Bob closed minded about certain recumbent designs.)  My recumbent experience goes back to 1979, and for many years my focus was on one design at a time, first Avitar 2000 based, then Counterpoint Presto. Bob brought in the Tour Easy one day. For the most part Bob has immersed himself in a given concept as presented by its creator, experienced it, and provided his deliberate view, in agreement or contrary to the precept at hand. After he had broadened my horizons over the years, Bob told me about 2 years ago that I had become too open……  In my experience, you can disagree with Bob, and it is still possible to continue the dialogue into the future.

Bob has always been a risk taker from where I sit. The RCN experience is the obvious example. Eventually quitting the mainstream job to publish full time in an industry not known for its consistency is high-risk behavior. But look a little deeper, and you see this quality as a way of life. When he has grasped onto a concept, he is running with it while you are still pondering, whether it be what to ride, where to live, what is the best way to educate your children, what to drive, etc.

Anything with wheels holds a curiosity for Bob. Recumbent bikes, hybrids, cruisers, a Prevost bus, the scooters of recent times, and others.

One of Bob’s favorite types of real estate is the parking lot. This could be anywhere as long as there are bikes to ride in that parking lot, and a desire to hang out late into the night riding and visiting with the creators of these cycles.

IHPVA Championships, 1992, Yreka, California. I was not at this particular event, but to this day it seems like it was the ultimate parking lot hang from many of those who were there, including Bob. Something about 2am on a small airport runway, talking about recumbents, drinking grape Gatorade, with recollections of the lecture by Gardner Martin earlier in the evening on HPV tandem design founded on sexual inspiration…………..

Slumgullion Tour, 1997. I invited Bob to participate in our annual Slumgullion Tour here in Colorado, 1997. I don’t think I can think of anyone who has come as prepared. The fear of the unknown (altitude & Rocky Mountains) and not wanting to be off the back were at work here. He had assembled a hill filled training regiment in Renton, Washington, and by the time he showed up in Colorado you needed a name tag to recognize the now 50-60# lighter and re-sculpted Bob. “I’m just going to come and cruise” said Bob. He ended up jammin’ with the fast pack all 4 days.

Interbike 1998, Anaheim, California. At the end of a trade show day, you hope for a cool dinner situation to rejuvenate your soul. On this particular year, there was a running joke about it being Bob’s birthday, and there was one evening where the dinner table was long, and the guests around the table were from the vintage founders of the recumbent world to some less visible ones who are just now coming into the public eye. Bob was sung “Happy Birthday”, lots of positive vibes with Dick Ryan there to bring everyone back to reality.

The Cold Room. If you visit Bob’s hotel room, remember Bob likes to keep his persona fresh, as in cool, as in……………..air conditioning to the max!!!

Thebis and the angels dressed in white.

Once upon a time a long time ago there was a trike called Thebis. I was invited to try this unique Delta style, rear steer machine out with Bob along the Green River in Kent, Washington. I think the other cycle along for the ride was a Ryan Vanguard. The Thebis was elegant, but a bit fragile. We were out about 5 miles from the van when the rear end quit driving. The day looked trashed, but to the east, 3 guys in white shirts are walking toward us over the hill! They stop to check us out, and recognized the part in question as a Boeing item, fixed it, and walked away into …………we’re back on the trail!

Bob and the fam.

Bob has been blessed with a flexible family. He has said that in marrying Marilyn, he married his best friend. He has the “it’s cool to be a dad” outlook on parenthood, and after having moved around to different locals almost continuously, has found Port Townsend, Washington as community of choice. The drumming with the kids, the community activism militantly right and left simultaneously and making it all seem in harmony. Bob hangs more in town these days, and is not as quick to hit the road without a worthy reason.

Well, that’s it. As Neil Young said to Bob Dylan at Bob’s 30th anniversary concert in 1992, to Connie and Laurie I say “Thanks for having Bob Fest.”